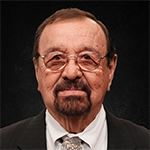 Robert Vera, District 6 Council Member, was elected to his first term on the Garland City Council in May 2017.

Robert Vera has lived in Garland for more than 40 years. He says public service is in his blood. His father was a school board member in South Texas for 25 years and set the example for serving others. Robert has been actively involved with the West Garland Neighborhood Association and served on the Garland Plan Commission for six years.

As a member of the Garland City Council, Robert plans to focus on neighborhood safety, helping people understand the need to comply with City codes, and improving streets. He appreciates the willingness of Garland residents to cooperate with projects and initiatives that will help the entire community.

Robert and his wife, Jeanne, have been married for 30 years. They were high school sweethearts who went their separate ways but found each other 25 years later. They have nine children and 17 grandchildren. The Veras enjoy helping their neighbors, and they encourage their children to serve others, as well.