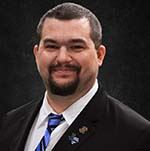 Robert John Smith, District 8 Council Member, was elected to his first term on the Garland City Council in May 2017.

As a lifelong volunteer and activist within the Garland community, Robert felt it was time to take the next step in his commitment to public service. Aside from serving as a volunteer for the Garland Animal Shelter and Castle Manor Nursing Home, Robert is a member of several community organizations including the American Red Cross, the Radio Amateur Civil Emergency Service and Leadership Garland. Robert wants to make a lasting difference in the city he calls home.

Robert’s family has lived in Garland for generations, and he plans to retire here. “I love the neighborhoods, the charm and the feeling of the community,” he said. “In the next decade, Garland will be fully built out. Our focus will have to turn to revitalization efforts. I hope to improve the city’s financial position and work to bring new life to older areas of the city.”

Robert lives in Garland with his wife, April, and their two daughters, Elizabeth and Lauren. The Smith family enjoys music, traveling, their two cats, exploring Duck Creek and eating their weight in garlic rolls from Siciliano’s A Taste of Italy.