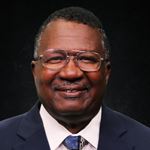 Ed Moore is a neighborhood leader, small businessman and pastor who wants to get things done for Garland by listening to constituents and championing their vision for better local government.

Ed Moore ran for Garland City Council District 3 because he is passionate about local government and is committed to our city. Ed and wife, Dianne, moved to Garland in 2004 and have two children. Ed, an avid fisherman, was drawn to Garland because of its proximity to Lake Ray Hubbard. Dianne loved the new Emerald Lake Estates neighborhood where the family settled.

In addition to service as an ordained elder in The United Methodist Church, Ed has also launched several successful businesses. He has a strong background in business and financial planning. He also has advanced degrees in criminal justice, political science, pastoral counseling, and divinity.

Ed's involvement in the community is extensive. He serves as President of the Emerald Lake Estates Homeowners Association. He is a graduate of Class 44 of the Garland Citizen Police Academy. He served as Chair of the Garland Community Multicultural Commission. Ed was also appointed to serve on the Garland Eastern Hills Advisory Committee. He was appointed to the I-30 Corridor Catalyst Study that reviewed the challenges and visions for South Garland to discover and implement plans to regenerate growth and development for the city. He served on the Friends of South Garland Board of Directors. In addition, he served on the Noon Exchange Club of Garland, Board of Directors. Ed project managed the Garland Mosaic Festival; Garland Labor Day, Kids BBQ Cookoff; and Noon Exchange First Responder and Leadership Awards Dinner.