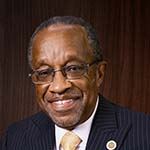 District 4 Council Member B.J. Williams was sworn in Nov. 17, 2020. B.J. was previously elected and served in this public service position from May 2012 through May 2018.

He and his family have lived in Garland since 1971. B.J. is a native of Bossier City, Louisiana. He is the proud father of one daughter, a local health professional (pharmacist). He grew up in an “across the tracks” neighborhood known as the “Village of Tuxedo Junction,” where indoor plumbing and running water were not made available to residents and installed in homes by the City until his junior year in high school.

Personal Note: I shall always be grateful and eternally indebted to my grandfather who was my “Hero, Master Teacher, Nurturer and Chief Motivator,” for his unshakeable faith and perseverance in leading by example. He led the charge in teaching and modeling to our “Village” how to advocate, agitate, participate, educate and negotiate with those in government for the greater good. As an ordained minister and longtime pastor, he put it all on the line providing courageous leadership in challenging the status quo and overcoming systemic targeted neglect in City services. He worked untiringly to uplift the quality of life for the community in which he was blessed to serve. I stand on his shoulders!

B.J. retired from the Social Security Administration in 2007 after 37 years of service. His career included a variety of positions, including Human Resources Manager.

As a public servant, B.J. remains committed to growing Garland as we work together to strengthen our pillars for progress: public health, public safety, economic development, fiscal soundness, social justice, neighborhood vitality and protecting home rule. Thank you, Garland (District 4), for another opportunity to serve you.